1. The Iowa Junior Beef Breeds Association (IJBBA) will be giving an award to members who accumulate the greatest number of points in a given year in each breed. Breed classes and year-end awards will only be offered to those breeds, which are paid members of the Iowa Beef Breeds Council (IBBC). A show year will run from Winter Expo to the first Saturday of August.

2. In order to earn points, exhibitors must be a paid member of the Iowa Junior Beef Breeds Association and each breed association in which they are exhibiting. All Breeding Heifers/Market Animals must be registered with their respective breed association and conform to their Iowa Breed Association rules for registration and exhibition. Points will not be accumulated prior to the date membership dues are paid or postmarked within 7 days of the show.

3. I.J.B.B.A. members must meet the minimum age requirements of their respective Junior Breed Associations and cannot have reached their 21st birthday prior to January 1, 2022. The maximum age for the exhibitor is 20 as of January 1.

5. IJBBA members must exhibit at six shows to receive the year-end awards presented by IJBBA.

6.  Points shall be earned on the following basis: 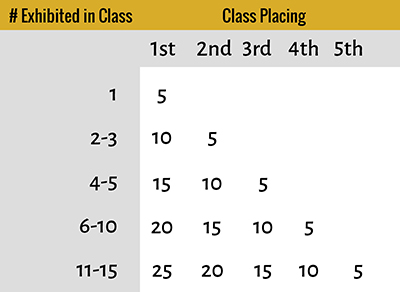 Classes must have no more than 15 head per class.
The I.J.B.B.A. reserves the right to correct point standings at any time during the year.

Points for these animals will be awarded as follows:
A. Supreme Champion will earn 30 points, and their class points will be replaced with the 1st place points of the largest class of the day.

B. Reserve Supreme will earn 25 points, and their class points will be replaced with the 1st place points of the largest class of the day.

C. 3rd Overall will earn 22 points, and their class points will be replaced with the 1st place points of the largest class of the day.

D. 4th Overall will earn 20 points, and their class points will be replaced with the 1st place points of the largest class of the day.

E. 5th Overall will earn 18 points, and their class points will be replaced with the 1st place points of the largest class of the day.

F. All other Breed Champions will earn 5 points, and their class points will be replaced with the 1st place points of the largest class within their breed.

G. All other Breed Reserves will earn 3 points, and their class points will be replaced with the 1st place points of the largest class within their breed.

8.  All points recorded in a class are based on the actual number of cattle that enter the show ring for that particular class.

10.  At a show, if one person exhibits a large number of cattle, only their three highest-point-earning breeding heifers/market animals from that day will be counted for his/her top ten points. However, all of their animals will receive points within their respective breed divisions for that day.

11.  Sanctioned shows must offer breed/commercial/crossbred classes for steers and heifers regardless of the number entered.

12.  Exhibitors must be present to show their own calf.  The cattle must be owned by, entered in the name of, and shown by the individual IJBBA member, exception being if the exhibitor has two or more animals in the same class.

15. If an animal is disruptive to its class, it is at the discretion of the show management to dismiss it from that class. If the animal is dismissed during a championship class, the exhibitor will be disqualified and will lose only the points acquired in the championship class. The reserve animal will then move up to compete for champion, and no other animal will replace the reserve.

17.  If there are 3 or more head in a breed division, there is to be no more than 60 day age difference between cattle. (ex. January/February Class; March/April Class).

18. Use of hemp hair, removed hair, or other hair-like materials added to the animal’s body will not be allowed. IJBBA does not allow surgical or any other alterations to the animals such as the use of permanent dyes or paints to alter the animals original color pattern. Exhibitors found in violation of this rule will be stripped of all their points and premiums for that day and all animals will be disqualified from the remainder of the show. After their third offense, it will be considered a code of conduct violation and will be handled accordingly.

19.  Exhibitors are not allowed to “fill” animals by using any artificial means of drenching such as pumps or bottles. Exhibitors found in violation of this rule will be stripped of all their points and premiums for that day and all animals will be disqualified from the remainder of the show. After their third offense, it will be considered a code of conduct violation and will be handled accordingly.

20. All breed association’s reserve the right to blood-type/DNA/retinal eye scan any cattle being shown within their breed divisions. Request for blood-type/DNA testing/retinal eye scan can come from the breed association or the IJBBA at any sanctioned show throughout the year beginning with the Iowa Winter Beef Expo. Should testing reveal that the animal has been misrepresented on its registration papers, the exhibitor will be immediately withdrawn from the point program within that respective breed for the remainder of the year and any points previously earned in that breed division will be void due to the fact that individual animals are not tracked. This applies both to steers and heifers.

21.  At Breed Field Days, exhibitors will receive points only for their breed and class placings. They will not receive any Top 5 (aka “Supreme”) points, and they will not be considered for the Supreme Exhibitor competition.  Breed Field Day Champions and Reserves will not have their class points altered.

*  At Field Days where animals are only allowed to show as “Owned” OR “Bred & Owned” (not both), the divisions will be considered as separate shows for the purpose of points.

22. Site-specific protests must be filed at the IJBBA Sanctioned Show. Any person wishing to have an animal inspected is required to submit a written protest and be accompanied by $100.00. The person placing the protest is responsible for all costs incurred to verify the protest. Written protest must state plainly the cause of the complaint and must be filed before the championship drive at the sanctioned show. If inspection is not sustained, the protest money will be forfeited. Protests will be handled by the breed association involved, crossbred protests will be handled by the Executive Director and the IJBBA Advisors.

23.  Conduct: Any unsportsmanlike conduct or misrepresentation on the part of an IJBBA member will not be tolerated. All IJBBA members and family/guardians are expected to be cooperative and courteous at all times. Any IJBBA member or family/guardian not complying with this rule is subject to disqualification or any other steps deemed desirable.

24. Dress Code: At a minimum all IJBBA members must exhibit in a collared neck shirt with sleeves/short sleeves and the shirt must remain tucked in at all times during exhibition.  Any IJBBA member not complying with the dress code at an IJBBA Sanctioned Show will not receive points for that show.

25. An animal can only be shown in one division (market or breeding) per show as well as only one breed if the animal is dual registered.

26. If a sanctioned IJBBA show receives a bad check for an entry fee, IJBBA requests that show management contact the exhibitor and give them 10 days to submit a cashiers check/money order or cash to their show for reimbursement of their entry fee. Show management must also notify IJBBA advisor immediately. This exhibitor will automatically forfeit that day’s show points. If after one bad check has been written and not cleared by the exhibitor, this exhibitor will not be allowed to participate in any other IJBBA sanctioned shows for the remainder of the year. If an exhibitor writes 3 or more bad checks during the 2022 show season, whether they make good on them or not, the exhibitor will be stripped of all points accumulated for the year along with their IJBBA membership for 2022.

27. Sanctioned shows are required to submit a $150.00 deposit to the IJBBA upon sanctioning. $50 of this deposit will be refunded if the show turns in their show results within one week (7 days) of the show’s completion.$50 will be refunded if the show results are submitted on the official Excel Show Results Template from the IJBBA.  If results are not turned in within 7 days the show will not be sanctioned the following year.